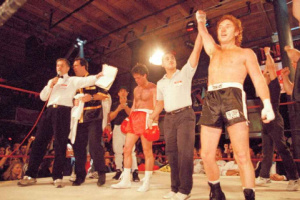 The Vanilla Thrilla! Today is the anniversary of the greatest fight in the history of celebrity boxing – Danny Bonaduce vs. Donny Osmond. According to ESPN, the Jan. 17, 1994 fight “came to fruition thanks to some inspiration and goading from WLUP host Jonathon Brandmeier” and “presaged a lot of what would follow in the world of celebrity boxing: the level of “celebrities” participating, professional-level trash talk, dirty tactics and ugly, often unwatchable fights.”